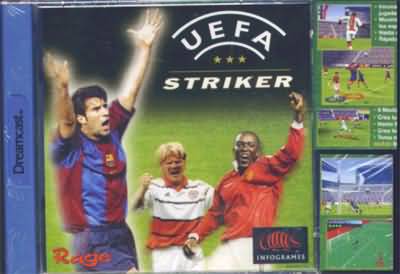 Never been the sporting type, I was never really into sporting games either. UEFA Striker has changed all that. UEFA has proved that football games can have all the tension of games like Metal Gear Solid, great action, simulation-style realism and an excellent fun factor. Aside from the stunning visuals one would expect from a Dreamcast game, UEFA has managed to demonstrate a variety of very strong traits in the game - unfortunately, there are a few factors that stop this game from being truly excellent.

Graphics Well, it is for the Dreamcast - therefore one would expect the graphics to be stunning, and indeed they are. The stadiums are immaculate, the textures are very well done, and the players are beautifully modelled and textured. Here are few screenshots to whet your appetite before I go into depth:

The first thing that struck me was the detail of the 3D engine - the stadiums can to totally viewed without any noticeable distortion or texture misalignment, it all looks crystal clear. The crowd is good and bad - the effect is great from a distance, but not too great up close. The photo flashes are a good touch, but UEFA goes a little overboard with the frequency. The textures on the pitch are great, the grass looks very realistic - worn down around the goal area, looks frosty when snowy, wet when raining.

The player modelling is brilliant, all the motions are very fluid. One problem I did have with the animation is that there seems to be very little transition between one action and another. For example, watching the players walk out on to the pitch then jog off into position is a very jerky affair. It really spoils the initial "woah" effect of the starting game sequence. This aside, the animations themselves, both in quality and number, are superb. The goalkeeper has to be some of the best 3D modelling I've seen - the amount of moves he is capable of it brilliant. From simple catches, to dives, to one-handed deflections, to rolling over the ball, all done perfectly. Other players are similarly modelling - the backwards scissorkicks being a favourite of mine.

One thing I felt the game was a little strange with was the handling of clearance shots. For example, if an attacker makes a cross into your goal area, you can get your defenders to attempt to intercept and clear the cross either by a header or volley (computer chooses this according to the height). Now, when a ball comes in the players intercepting the cross seem to do so at an incredibly slow rate. Headers look like a slow motion space walk. I don't know whether this was to ease gameplay, but I think it doesn't help too much and has an impact on the overall realism of the game.

Gameplay Talking of gameplay, the gameplay is UEFA is mixed. You can choose to have a friendly match against the computer (or 2nd player) or you can choose to enter in a series of cups and challenges depending on the league. For legal reasons, the club names are all non-descript (ie. Arsenal FC is called 'Highbury'). This didn't affect gameplay in any sense, though, and anybody with a serious interest in soccer will easily pick up on the 'false names'.

My main complaint with UEFA Striker's gameplay are the controls - or the act of controlling your players. I found that changing player constantly got very confusing especially in high-stress situations. The directional control used was well done since there is a slight delay before directional control is passed to you. Nevertheless, control sometimes was incredibly in a tight situation. While the computer manages to pass the ball around in very tight situations, you will find yourself fumbling trying to get the ball out of the tight spot quickly, even if it involves conceding a corner or throw-in.

Tight-spots not included, the actual layout of controls on the Dreamcast controller are very well done once you've learnt them (took me about 2 hours to really get a hang of the controls). The training missions provided help a lot, especially when it comes to group tactics. There's nothing like the feeling of running down the wing, crossing in near the corner to slide in a kick the ball into the top corner of the net. Beautiful. There's nothing more frustrating than taking a shallow shot, having it deflecting out into the centre and attempting a scissor kick only to have it smack into the crossbar. The game flow of UEFA is excellent as long as you can get out of those tight spots!

Artificial Intelligence Sure does! The AI is UEFA is very impressive, making excellent use of its players to give the player a definite run for his money. The Artificial Intelligence seems very good at choosing an overall strategy to employ - be it very offensive and saturating the enemy goal area, or bringing back the majority of the players to defend the fort. The AI also manages to make some very quick decisions - for example, the AI took a corner and a striker kicked it straight at the goalie, who only managed to deflect it off to his right. Then another striker appeared out of nowhere, slid in and booted it in. Watching the replay, you could see the final striker break to right the minute the ball touched the goalie's hand, and went in for the slid a split-second later! Quite incredible.

The "referee AI" is also nicely done - I've only been booked for a foul I didn't committ (honest, I didn't!) once. The referee awards free kicks quite a lot, but not overly so. One thing that might have been improved was that the referee had no concept of when to stop the game during overtime. Referee's rarely stops a game as team attacks a goal, whereas the UEFA ref seems to stop the game at a rather arbitrary point.

Overall, the artificial intelligence is very impressive. Uses the pitch and players well, seems to employ an overall strategy and will give any player a decent challenge.

Other Notes There are a few things that I feel I should mention since they don't fit into any of the above categories, but the bad points add up to really knock down the game into the 80%+ range. Firstly, I felt that the interface was rather bland and a little cumbersome. There were too many queries at times, and even to play something simple you have to wade through several screens before even loading up a friendly game.

Secondly, the sound was a little uneven. The commentaries were nicely done, although they got a little tiresome after a while ("That was the best save I've ever seen" comes about 3 times a match), and the crowd effect was very cool (start to cheer more as you approach the goal), the actual game sounds were a little bland. The kicking, ricochet, and general noises were a little subdued. This gave you more of an impression you were watching it on your TV than playing it.

Finally, I think that while I've praised the graphics and modelling, it could be improved. Dreamcast graphics can match those of the PlayStation2 release titles with a little imagination, yet UEFA Striker does not compare to FIFA Soccer. This might be an unfair judgement to make, but I find myself repeatedly going back to other Dreamcast games after PlayStation2 equivalents, but not UEFA Striker.

Conclusion UEFA Striker has demonstrated the power of the Dreamcast with its incredible graphics, and has definitely got my stamp of approval when it comes to Artificial Intelligence. The gameplay, while mixed in terms of quality and realism, should satisfy most people from gamers to hardcore soccer fans. It was only really the control, interface and sound that really stopped this game from being something quite phenomenal.