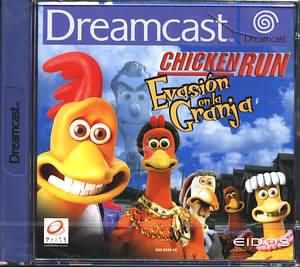 Eidos Interactive and Blitz Games bring us back to the 1950's. Based on the hit Aardman Studios movie of last year, Chicken Run is the Great Escape, with chickens. In the game, you control a chicken called Ginger. She is a bit of a revolutionarry and knows full well that if she and the other chickens do not escape from the farm that they will soon enough be killed by the evil Mrs. Tweedy.

And so she starts on her mission to gather various bits and pieces of equipment from around the farm, with which her sidekick Mac will build up various pieces of machinery with which they can try to escape their destiny. Through the game she will need help, and this comes in the form of Rocky, an American rooster and two shady rats called Nick and Fetcher, with the ultimate goal of their freedom. And so their adventure starts.

The game is a free roaming 3D adventure. Through the game you will need to roam around the farm picking up parts, while hiding from the eyes Mrs. Tweedy and her dogs. To do this you will need to use some degree of stealth, be it hiding in the shadows to avoid being seen or else jumping into a welly and walking around.

Graphically, the game is very well done, and looks pretty much exactly what the scenes in the movie were like, although much more is also to be seen. The characters themselves may look a little chunky, but the game moves quickly and really gives off the atmosphere of trying to escape, especially in levels at night. Between most levels are cutscenes from the movie itself, which help the game with the storyline, as well as adding to the humour that is in the game already.

The controls are fairly easy to get the hang of, and the sound is also good with good voiceovers for the characters which sound like their movie counterparts, and also the music can in some parts really help the atmosphere in the game.

The game also contains plenty of minigames which sidetrack you slightly, but do help you earn medals while also helping your goal of freeing chickens. Although there are numerous in the game, I still found the first one the most fun, where the chickens had built a model of Mrs. Tweedy and got caught and chased by dogs. You have to sprint down a track while freeing chickens with two dogs chasing after you.

Overall, Chicken Run is an excellent use of the movie licence, and considering the nature of the film the game fits in perfectly. Anyone who liked the film will love the game, as you can roam around the authentic sets, interact with loads of characters and see some of the best scenes from the film as a reward for beating the levels.