Evolution - The World of Sacred Device 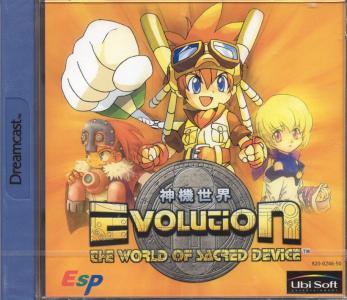 Many millennia have passed since the demise of a superior ancient civilisation. The civilisations that followed have now advanced enough to once again build submarines and aeroplanes.

Now, we find ourselves at the end of the 1930s epoch, according to the Western calendar. Those who carry Cyframes--technology excavated from ruins of this ancient civilisation--are called "Adventurers" or "Cyframe Users".

These individuals make their living by accepting assignments from the "Society", the organisation responsible for investigating the ancient civilisation. For many generations, the Launcher family has produced a long line of famous adventurers. They are now long since gone and this glorious heritage seems about ready to come to an end. But into this family is born a single son, Mag, who has dreamt all his life of becoming askilled adventurer just like his mother and father. About a month after Mag's parents disappeared on one of their adventures, a lone girl appears at the Launcher house with a letter from Mag's father.

"You must protect this girl, Linear, until I return", is all that is written in the letter.

Since then Mag and Linear spend have spent their days investigating ruins under the watchful eye of their butler Gre Nade, but it's not until the day the army of the 8th Empire appears that the true adventure begins So pack your backpack, check your Cyframe and get to work! M

Help Mag Launcher in his battle against the 8th Empire! Explore uncharted dungeons in search of precious artifacts. Battle colorfully animated bosses with creative special moves and mystical spells. Along the way the mysteries of ancient Panmann civilization and the "CyFrame" machinery unfold. Revolutionary 3D graphics and animation only possible on the Sega Dreamcast bring the RPG genre to the next generation.