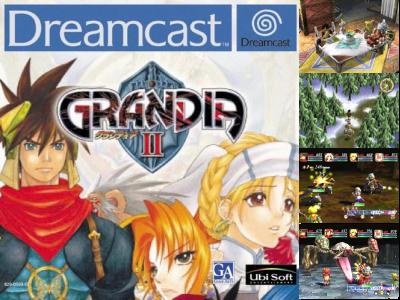 The original Saturn version was one of the most controversial titles for Sega's 32 bit machine. With over a million copies sold in Japan and great scores in Famitsu, surely this was the title to revive sales of the Saturn in the west?

Unfortunately Sega of America deemed it too expensive to translate resulting in a huge uproar on games forums as well as newsgroups, an over ambitious translation was attempted and a large number of online petitions were created. Having played the Saturn original (although not to completion) I can see why - a great battle system, good (in its day) graphics and a solid plot combined to make one of the best Saturn games ever.

Fortunately the sequel lives up to the hype by delivering a far more convincing 3D world and better character design. Grandia 2 takes place in a world split in two due to meteorite crashing down in the past. You take control of a 17 year old guy called Ryudo who is a bit of a hot head and always speaks his mind (he reminds me of Yusaku from Macross Plus). Ryudo is accompanied by a talking eagle called Sky who he even teams up with for a super attack. At the beginning of the game a reluctant young priestess of the same age called Erena joins his group (Ryudo is being paid to protect her) who is quite the opposite of Ryudo: polite (she constantly bows as a sign of respect - it is a Japanese game after all), caring but hopelessly vain and emotional at certain points. However the real star of the show is the provocative Millenia - superb voice acting and dialogue combined with her sassy threads and complete self confidence make the numerous cut scenes involving her a delight to watch.

The battle system hasn't changed since the original, although the graphics have been improved ten fold. As the player walks around the game areas, monster can be seen walking around - battles are not random. Approach them head on and they will try to attack you. This gives you the chance to run away if you're weak or just fed up with countless battles against small fry that aren't worth it. If a monster attacks you normally then you take it in turn to dish out damage as normal however if you attack an enemy without it seeing you or a monster does the same to you, an ambush occurs with the aggressor surrounding the enemy and striking first.

When in combat, four different attacks can be made: combos, criticals, magic spells or super combos. Combos are more powerful than criticals and are effective in countering enemy attacks however criticals postpone enemy attacks and can cancel their spells. Magic spells serve to heal, improve your fighters' stats, reduce the enemies' stats or simply cain the hell out of one or more enemies with the sweetest of the sweet eye candy. The animations are smooth, lens flare is used during outside battles and the transparencies vibrant, all this without slowdown or jaggies. As with the latest Final Fantasy games, the more powerful spells involve CG video sequences with an anime flavor. Real time reflections? Check out the cathedral's marble floor for a great example of that. PS2 eat your heart out. Whilst Shenmue is the reference graphically for real world style games, Grandia 2 is the elite when it comes to manga style graphics.

The monsters are well animated and show some new ideas but unfortunately they don't vary much from area to another. They are recycled too often from one area to the next and whilst they get beefed up or frequent with other monsters, it gets dull. Also although bosses are usually surreal and original, they don't crop up too often. Hey! I wouldn't mind if they ignored trying to think up more bosses and just used Gamera, Mothra and Godzilla to make up the numbers. It's a shame because bosses are epic struggles that are far more fun than slaying just another big foot or troll, with some cool magic attacks being exchanged. Bosses are more often than not against a part of Valmar's (evil ancient god that can be likened to Bulzum in Shining Force 3: his revival is imminant) body such as his tongue or eye.

The battle music is such that it does not get tedious even after prolonged play and varies depending on the situation (normal battle, ambush or boss). The field section music is very hit and miss however with tunes varying from mundane to acceptable. Village music is suitably naff as with all RPGs to date.