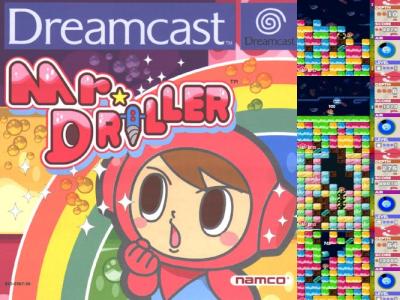 Time again for one of those mind-boggling games that does your head in, but you just can't put down. This time it's in the form of Mr Driller and the concept of the game is just what the title suggests! The earth's core is beckoning as you dig 'til you drop with one of the most compelling puzzle games to hit the Dreamcast.

The aim of the game is to take your driller, Susumu, as far down in the ground as you possibly can in a series of games that are fast, frantic and mentally challenging. Your main job involves avoiding falling blocks and planning a route that takes you deep down without getting you squished, as well as ensuring Susumu has enough air to stay alive by collecting buried air pellets. The game is set around three main modes of play: Arcade, where you are set a number of metres you must drill through to beat the game; Time Attack, which sees you drilling up the earth as far as you can in a predetermined time limit; and Survival mode, which challenges you to drill as far as you can equipped with only one life.

As you drill down through the blocks, your actions will have an effect on the other blocks around you. This means that as you drill down you loosen the foundations of the bricks left above you and must find a route downward that not only ensures a clear pathway with air pockets that can be easily snagged, but dodge the unsteady mass of bricks that fall around your head. As you dig, most of the blocks are easy to get through, but your route will also be scattered with blocks marked with an 'X' that are harder to drill through and, once destroyed, use up lots of your valuable air. You will also find that as the blocks fall they group together in a certain way. Usually, as the same colours link together they either enable a structure that can't fall any further down or amass to a point where the blocks that have linked up disappear altogether.

The two player games are a race to see who can out-dig the other and reach the bottom first and whether you're playing on your own or against someone else, the game still has the same amount of action and pace and is really difficult to leave unfinished. This frustrating yet entertaining genre of game has seen a lot of titles try to capture the balance between gripping action and mind-bashing monotony and failed. Mr Driller is one game that does it really well.

On the downside the game is nothing special to look at. The basic display is an array of colourful blocks and a tiny bloke with a drill. So, if stunning graphics is what you want from a game, then you're probably not going to be impressed. But, with a game like this what else do you need? The sound is equally cheesy and annoying, which fits the action perfectly. If you really want to concentrate you're going to have to turn it off and stick some relaxing tunes on the stereo.

Mr Driller is one of those games that you are either going to hate or become totally addicted to. Have a light hearted go at it, or if you're really interested to see how your mind works, concentrate hard and see how long your mental agility actually lasts before you get squashed under a pile of bricks. It's cute, funny and a lot more challenging than it looks. So get your thinking caps on and be prepared to get sucked in. Mr Driller is one game that will make your brain ache.