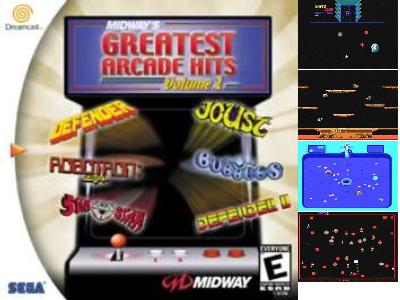 Ah, the days of yore. Weekends spent begging your parents for an allowance advance so you could blow it at the arcade on games like Joust and Defender; games with unique gameplay that’s never been duplicated in the years since. A few years back, when Williams was still a semi-independent company, they recognized the nostalgia many of us felt for these games and began the classic gaming craze with the PC compilation known as Williams Arcade Classics; the world hasn’t looked back since (er, actually it has, as evidenced by this current release). Midway’s Greatest Hits Volume 1 is the spiritual successor to that package, containing some of the same games as the earlier Williams compilation and ported over to the Dreamcast.

Now that Midway has both the Williams catalog as well as their own to choose from, we’re treated to five top-quality games here (as well as one lesser known title, Bubbles). Unfortunately the Dreamcast is missing Spy Hunter and Root Beer Tapper, both of which appear on the N64 version of this same compilation – in their place we have one sequel and the aforementioned semi-dud of a game. We can’t complain about Defender II (one of the best sequels ever made), but we’d have much preferred seeing either of the N64’s two differing titles in Bubbles’ place. On the plus side, all of the Dreamcast compilation’s games are emulated, meaning you’ll get an experience closer to the original than you would with a ground-up port.

Technically speaking, all of these games look and sound perfect. Unlike the N64 ports, the Dreamcast compilation games run at full speed without slowdown and feature graphics that are as crisp and clear as you remember them in the arcades (minus the soda stains and burn-in you probably became accustomed to seeing on arcade monitors). Sonically you’ll be amazed at the creativity sound designers possessed way back when – Defender and Robotron, particularly, still have some of the coolest sound effects ever found in video games. And who can forget Sinistar’s “beware, I live” or “run, coward!”? The only real quibble we have is the lack of arcade stick support – a few of the games will work, but they all think you’re using a standard controller. Hey, Midway! You do know what kinds of games arcade sticks are made for, do you not? Arcade games!