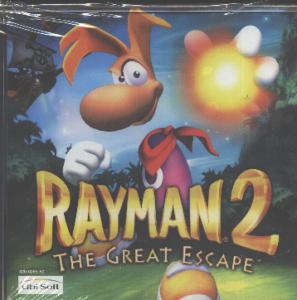 Sequels. They're the stuff this industry is made of, for better or worse. When someone comes up with a great or (more often) successful game, it's almost inevitable that their thoughts will then turn to a possible sequel. This is only natural, as the premise of sticking with a successful formula is rather inviting to the ever-wary developer. One can imagine that it's a pleasant surprise, then, when a mere sequel turns out to be even better than the original source which spawned it.

Rayman 2 is just such a game. The original Rayman was a French-developed 2D platform romp which featured good control and progressive character upgrades, ala Metroid. It didn't exactly set the gaming world on fire, but was a solid game nonetheless. It was probably most notable for the fact that it appeared not only on the Sega Saturn and Sony Playstation, but also on the ill-fated Atari Jaguar. Thankfully, Rayman 2 manages to surpass its source material in just about every possible way, in one of the best 3D platformers to date.

The story? Space pirates have invaded Rayman's world, planning (of course) to take over the planet and enslave the populace. Resistance groups pop up around the planet, with the heroic Rayman on the forefront of the fierce battle. Unfortunately, the pirates score a critical victory when they break the planet's core, the Heart of the World, into a thousand pieces. Rayman and the other key planetary defenders are stripped of their powers, leading to their capture and mass imprisonment. With Rayman behind bars, is there any hope for the small planet?

The first thing you'll notice is that Rayman 2 is an absolutely beautiful game. It's not that the polygon counts are insanely high, because they're not. Nor is the animation stunning. What makes Rayman 2 so wonderful to look at are the textures, the glass-smooth frame rate, and the distinctive level architecture. Colors are rich and full, and range all over the spectrum. One level will have you traipsing through a dismal green and brown swamp, while the next you'll be jumping over gorgeously textured lily pads floating down a misty blue river. The levels put these textures to excellent use, with delightfully stunted and crooked architecture that looks like it lept out of some dark recess of Tim Burton's mind. While there are a few lacking sections spread throughout the game, for the most part Rayman 2's designers managed to keep the manic motif consistant, with excellent results.

In addition, the character designs are top notch. Rayman, his friends and enemies look right at home in the twisted environments, sporting some seriously odd and creative looks. Particularly notable is Polukus, the world's diety, whose ridiculously squat body and long arms are delightfully incongruous. These unique characters move the story along by engaging in surprisingly well-written dialogue, which helps to fill out their personalities and reveal their emotions. There are even a few funny bits, which made even me grin once.

The fact that this is not Mario 64 becomes especially apparent when considering Rayman 2's "less is more" approach to sound. Sometimes there is no music at all, and the soundscape consists simply of environmental sounds like waterfalls and the nearby fauna. Other times a level will have ambient theme music that will change based on the current action, turning dark and sinister when a pirate is spotted, or upbeat and exciting when you attempt to ride a difficult to control rocket. All the pieces are expertly composed, and sound great. Even better, this interactive approach to the soundtrack keeps the game feeling fresh, and unlike other games, it's seldom that a specific tune or theme will be overplayed to the point of annoyance.

Gameplay consists of your standard 3D running, jumping, and climbing. There are light puzzle elements, but most of your time will be spent simply surviving the levels. Toward this end, Rayman can float (and later, fly) by using his propeller-like head, and can also shoot rebounding energy spheres at his opponents. However, his most interesting ability is being able to swing freely from certain anchor points, ala the NES classic Bionic Commando. This potentially tricky gameplay component is handled flawlessly, and long swings give a great feeling of speed and freedom.

As you might expect, the controls are outstanding. Rayman responds to inputs instantly, and generally feels tight all around. My one niggle might have been in the swimming controls, which seemed a bit odd at first. You have to press L-trigger plus up to dive, and B plus up to surface. It was rather disconcerting, but soon became second nature. In fact, now I much prefer this method to the one employed in games like Mario 64, as players can dive or surface instantly, instead of having to wait for their character to rotate in the proper direction. The fighting controls are similarly intuitive. You simply hold the L trigger to enter strafing mode, which allows you to dodge just about anything the enemy shoots at you, while keeping aim yourself. It works like a charm.

Perhaps the largest fault in Rayman 2 is a graphical one - the character animations often do not display the smoothness characteristic of the rest of the game. For example, while the expansive environments roll by at a sweet 60 frames per second, the pirate enemies move in rather jolting steps. This is because there is no interpolation system that adds animation frames between the key frames, giving certain characters a somewhat jerky movement. While this is used to artistic effect in a few places (such as in the humorously rapid emotional changes exhibited by Globox's children), for the most part it just serves to give the game an unnecessarily rough graphical edge that could have easily been remedied.

Also, like certain other 3D platformers, Rayman 2 sometimes takes the camera out of player control in order to present a more dramatic point of view on the action. Once in a while this proved to be quite annoying, and even a slight detriment to gameplay. Thankfully, such occurrences were few and far between.

The bonus stages are extremely annoying. They consist of standard races where the outcome is determined by how quickly you can jam two buttons. The time requirements are rather tight, so all I managed to do was fail miserably and strain my wrist repeatedly. I'd definitely recommend a controller with rapid fire capability here.

Finally, the game is a bit short. It's not particularly difficult, and only takes about 10 hours to run through from start to finish. It'll take a while to find all of the secrets, but it still does not possess the massive replay value found in, say, Sonic Adventure.

Rayman 2 is a wonderful surprise. Ubisoft could have just done a quick and sloppy N64 port, but instead they took the time to enhance the game to take advantage of the Dreamcast's power. The result is a beautiful, well-designed adventure that easily takes its place as one of the best 3D platformers available today.