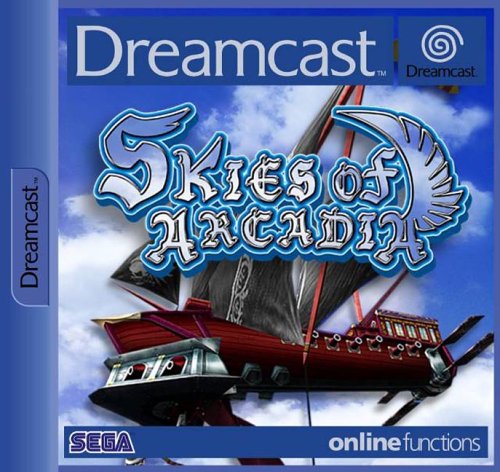 Graphically, Skies of Arcadia is surreal and stunning. Arcadia is a magical world where folks float through the air on giant airships. A young and lively air pirate named Vyse, who leads a swashbuckling troupe of pirates named the Blue Rogues, spends most of his time travelling from floating island to floating island. While touching down on the Valuan Empire one fateful day, Vyse and his sidekick Aika rescue a mysterious girl named Fina, who was captured while trying to find six magic crystals used to summon "Gigas," powerful ancient weapons. Naturally, the Valuans want the Gigas for their own malevolent political plans, so Vyse, Aika, and Fina set out to find the precious, scattered crystals and fight enemies (both human and inhuman) to keep the world safe from tyranny. In total, there are six huge lands to explore with many different kinds of environments, such as villages, dungeons, forests, and deserts, as well as otherworldly locations.

The turn-based combat system is effective, with more than 70 customisable weapons to use (based on different colours) and more than three dozen magic spells (and special attacks) as indicated by the game's "spirit bar" shown on the screen. The visuals during the fight scenes may cause your jaw to fall to the ground with its bright lights and mesmerising colours and textures.

Skies of Arcadia is a highly addictive, gorgeous, huge, and deep role-playing game worthy of your attention. Kudos to Sega for creating a breathtaking fantasy that will likely be a mainstay in Dreamcasts well into the spring.