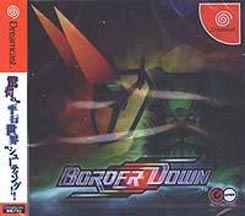 The game borrows heavily from the "golden age" of shooters, with influences from the likes of Darius & R-Type .... which is no bad thing! Unlike other games in this mould you don't have a stock of lives as such. You initially start on a hard setting. However, if you die you move down a difficulty setting .... or you "border down"! When this happens the backdrops & music change, alomg with the attack patterns of the enemies. The soundtrack suits the game perfectly. The visuals are amongst some of the best seen on the Dreamcast. Gorgeous brackdrops and stunning end of level bosses, with lots happening on screen & all moving at a silk-smooth 60 frames per second. Unlike other recent shooters, the enemies don't throw wave after wave of bullets at you. You always feel that you can cope with what the game throws at you.