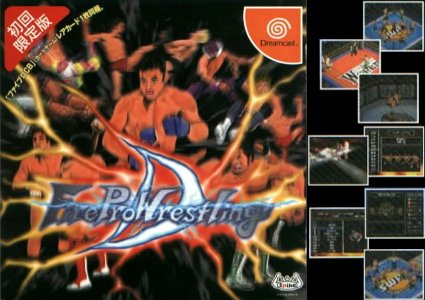 This series of games originally started by Human goes back many years to the days of the PC Engine and Super Famicom. To be honest the series still hasn't improved much in looks since then, hahaha. Ok, so everything is more colourful with higher detail but the ring is still viewed in an isometric view point with tinny little guys moving around all over it. So, fire Pro Wrestling does look like crap for a Dreamcast game or even a Saturn game for that matter but it is great fun to play. Only 2 hours ago a friend and I slugged it out in a 4 player match while drinking a few beers. I can tell you that this is a great game for parties. Not to sure how it will feel in one player mode though. There are loads of play options as well as character options. Just about every option you could wish for is here, so it should keep most gamers busy for quite some time.