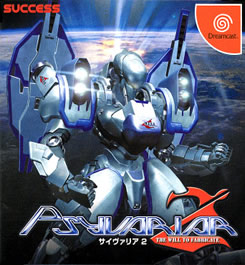 Great news for Dreamcast & shoot 'em up fans alike! It has been announced that the arcade game Psyvariar 2 will be converted for the Sega Dreamcast. The 2D shoot 'em up originally ran on Sega's Naomi hardware, so it was only logical for the game to be released on Sega's home machine.

While there have been a few shooter's on Dreamcast of late this one stands out from the crowd as having a novel power-up system. Instead of collecting power-ups to boost your arsenal, you have to get as near as possible to the enemy fire to be powered up .... this is known as the "buzz" system.