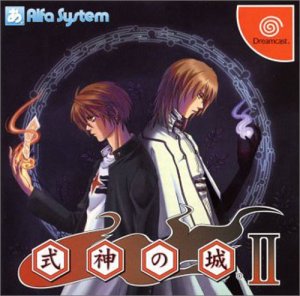 Alfa System listened to their loyal Dreamcast fans and have brought us Shikigami No Shiro 2 (The Demon God Castle 2 in English) on the 25th March 2004. From what I can tell, the Dreamcast version seems to have all the same options as the Game Cube version (first console version) including the gallery mode which is a great sign. There are loads of play modes plus a remixed soundtrack option, full speech for each character that can be switched on or off and a very convenient practice mode. Each player has a variety of two different attack styles to choose from which can be accessed by pushing left or right on the character select screen. A great point about Shikigami No Shiro II is that every one of the characters has their own unique way of shooting just like characters of a fighting game have their own unique fighting style. Personally I haven't tried out every character much yet but it's going to be fun finding out.