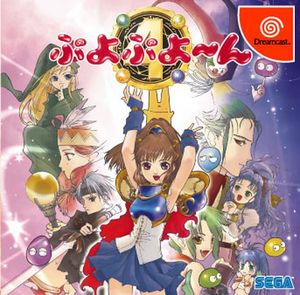 This time around you take control of a little girl in a short skirt and armour, the Puyo Puyo circus has come to town. The circus is an exciting place for a young girl, and she quickly becomes curious and enters the circus to see all the friendly people in their circus costumes.

The circus performers don't take kindly to you wandering around and they take out their aggression via bouts of Puyo Puyo. This is where the story begins, but as it is all in Japanese it is hard to follow. Basically as you progress through the various circus acts the hidden truth of the Puyo Puyo circus comes to a thrilling conclusion with your alter ego! These story sections are played out in bouts of Puyo Puyo with the story text preceding each round.

A new feature for Puyo Puyo 4 is the special attack. Special attacks are earned by pulling off successful combos, you can have a maximum of 3 special attacks stocked in each round. Special attacks vary depending on the character, some make all the Puyo Puyo the same colour so the disappear, whilst others remove whole columns of Puyo Puyo. In each area of the circus you will encounter small groups of performers, the last of which is a boss. By defeating the boss they decide to help you and you can select which helper you desire before each round. It is important to know your helpers as in the single player game they act as your special attacks. Puyo Puyo is a good one player game, but it is most fun in multi player mode, playing against human opponents is always best especially if you pick a character with an excellent special attack!