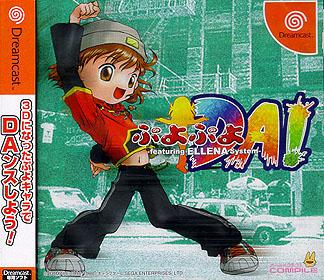 Out of all of the genres Puyo could've found itself in, I really wonder how they ended up in a rhythm game. Not being one of those games that uses the dance pad, you control the action entirely with the controller. The gameplay is exactly like Parappa the Rapper - the computer has a series of motions, and you have to copy them. Unlike our favorite old skool dog, your motions have no effect on the music, thereby eliminating the main draw of the game. While the ultra-happy J-POP you dance to is reasonably OK, copying motions with the controller is just pretty dull. I'm sure this was a great competitor to Bust a Groove back in the day, but Dance Dance Revolution and other games that require actual physical motion have made these kinds of games very outdated.

If you really need to see your favorite Puyo characters in 3D, this is your opportunity. They all look ridiculously cute and sport some amusing outfits - Arle gets it on with a hip-hop outfit, Schezo goes for some maraca action in a somewhat fruity Spanish outfit, and Rulue seems to be content in black lingerie. And seeing that dancing fish-whatever in a ballerina costume is pretty priceless. Beyond this novelty, the models are made of such low-poly models that it barely looks any better than a PSOne. In other words, if there's one Puyo game you shouldn't own, it's this one.

The concept of the game is actually based off of an old demo in one of Compile's Disk Station releases, called "Broadway Legend Ellena". Compile decided she was a worthy enough character to feature in a whole game, hence the existence of Puyo Puyo Da! Actually, putting an exclamation mark after that really just makes the game sound even more pretentious, because there's absolutely nothing exciting about it.