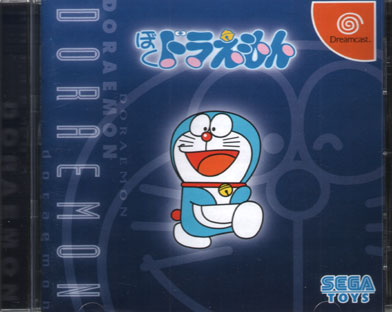 The young Nobita Nobi is always in trouble. Either by his own bumbling self or through the machinations of his archenemies Gian and Suneo, he never fails to undermine his situation. Two centuries from the present time lock, Nobita's lineage is unremarkable and his future children are impoverished due to Nobita's failures. To rectify this state of affairs, Nobita's great grandson sends a robotic cat back in time to save grandpappy and thus the Nobi progeny from indigence. Doraemon hurtles back through the centuries to help his new master with the rigors of the youthful life and change the course of the future. Clever devices from the 22nd century help the cause and allow Doraemon to save Nobita in times of need. Doramiyan, Doraemon's younger sister and Shizuka, Nobita's future bride, provide friendly foil in the game. Gian, Suneo, and situational hazards supply the fire.

This is among one of the rarer Dreamcast games out there. Originally released for less than a week before Sega noticed a serious bug in the game that caused it to crash all the time. The game was recalled the re-released a month later with the bug fixed. Sega Toys (not Sega but a division of Sega) decided not to print that many copies of this game due to lack of interest from the Japanese public, thus making it a pretty difficult game to find these days.